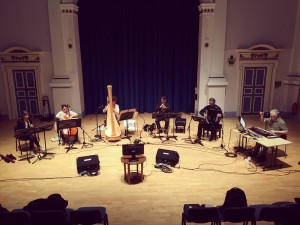 Studio 6 is a collective of Serbian performing musicians devoted to promotion of today’s music. A modular ensemble, which includes Baroque flutes, trumpet, harp, accordion, cello and electronics, gathers internationally acclaimed performers of composed and improvised music. The artistic goal of the ensemble is to encourage a dialogue between listening, interpreting and creating in contemporary music. Co-founder and artistic director of Studio 6 is Milana Zarić.

Their activities range from Serbian first performances of 20th century solo and chamber repertoire, to educational workshops for students and performances of experimental pieces by composers and sound artists. Special attention is given to commissioning and creative collaboration on new pieces, given the possibilities of the ensemble’s un-orthodox instrumentation, as well as welcomed additions of other performing arts, such as theatre, dance and video. In addition, an extensive research is conducted towards the avantgarde composers of the Yugoslav era, such as Ernö Király. Ensemble has performed on original instruments made by the composer – zitherphone and tablaphone.

Collective Studio 6 is one of the partner in current project Gender equality = Cultural diversity, supported by UNESCO International Fund for Cultural Diversity (2021-2023).