Milana has been actively engaged in free improvisation since 2009. Her Master thesis at the Royal Conservatoire in The Hague, entitled Structuring free improvisation, dealt with work dynamics of a plucked strings and percussion ensemble (Ensemble Echoes). It was a one year project during which the group regularly met and explored micro sounds, overtones and resonances between naturally related instruments, such as the harp, piano, acoustic guitar, koto, double bass, percussion…
Over the course of her specialization in The Hague, she has participated in workshops and performances with Richard Barrett, Peter van Bergen, Anne la Berge, Butch Morris, Evan Parker, Augusti Fernandez, Yedo Gibson, Mary Oliver, Wiek Hijmans, Marie Guilleray, Raoul van der Weide etc.

Other projects include an ensemble of strings and percussion with Iranian and Middle Eastern instruments  (qanun, santur, setar, kemence and tombak). The project, conceived as an exchange between improvising traditions of Europen and Asian musicians, was part of the Atlas academy 2009 and 2010, organized by the Nieuw Ensemble in Amsterdam.

For the Spring Festival solo harp improvisation performance in 2011, Milana has collaborated with saxophonist and improviser Yedo Gibson. During the process of working on the piece, the intent was to communicate outside of boundaries of typical composer – performer relation, hence there was no score nor any written guidance.
The result was freely improvised material, by Milana Zaric, stemming from ideas, concepts and tools used in improvisation by Yedo Gibson. 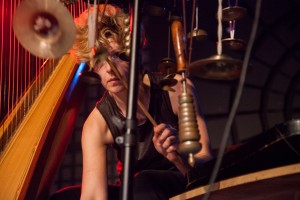 Back in Belgrade, Milana co-founded a collective for improvised music performance, ImprovE2. The monthly series of concerts, installations, site specific interventions was organized every month, at different venues in and around Belgrade. Between 2012 and 2015, the collective organized more than 30 events, with dozens of performers from all around Europe.  More info: http://www.i2.rs

Since 2014, Milana has performed in New York’s Spectrum (with Richard Barrett, Peter Evans, Christopher McIntyre); at Ring Ring Festival Belgrade (Zsolt Sores and Agusti Fernandez respectively), Showroom of contemporary sound festival in Zagreb (with Ensemble Studio6, Alen Sinkauz, W0o and Svetlana Maraš); Singapore (with Tim O’Dwyer), Budapest (with Zsolt Sőrés), Melbourne (with Golden Fur ensemble; with Dave Brown; at Make it up club), Subotica (Jazzire festival, with Yedo Gibson and Vasco Trilla), Minneapolis (with Maja Radovanlija and 113 Composers Collective), with Katalin Ladik. In November 2021 she has been given carte blanche to invite artists to perform with at the 25th Ring Ring Festival, and the resulting trio with Frances-Marie Uitti and Elisabeth Harnik performed during a live broadcast from Radio Belgrade. in 2020, Milana initiated a quarantine remote project with fellow Serbian women improvisers Marina Džukljev, Manja Ristić and Ivana Grahovac, Strange Strings #3. In 2021 Milana initiated an electroacoustic quartet with Richard Barrett and Marina Džukljev, that performs with different guests from abroad. in 2022 they will team up with violinist Biliana Vouchkova for two concerts and recording sessions.