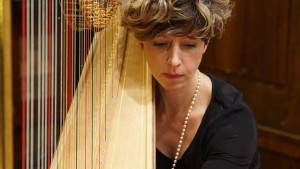 Milana Zarić has been principal harpist at the Belgrade Philharmonic Orchestra since 2005, performing regularly under top international conductors and soloists. The orchestra has toured the United States, (Carnegie Hall included), Switzerland, Germany, Sweden, Italy, Austria, Oman and ex-Yugoslavian countries. In April 2014, Milana has appeared as soloist with the BPO in Belgrade.

Milana is active as a soloist and chamber musician, having been the founding member of several chamber groups based in Serbia and The Netherlands, such as Trio Timbre (flute, viola and harp) and Ensemble Echoes (plucked string instruments and percussion). She has regularly performed in a variety of chamber ensembles, such as Atlas Ensemble in Amsterdam, Ensemble Metamorphosis in Belgrade, Žebeljan Ensemble.

From 2009 to 2011, Milana was doing research in contemporary music for harp and improvisation, at the Royal Conservatoire in The Hague. Upon her return to Belgrade, she co-founded a contemporary music collective and ensemble Studio6. Project highlights include a performance of Heiner Goebbels’ Songs of wars I have seen in Belgrade in 2013, conceptual project Intimate rituals, combining original music by Eastern European maverick composers Ernö Király and Horațiu Rădulescu, as well as electro acoustic work for 6 players in 6 parts close up, by Richard Barrett. Studio 6 has collaborated with composers, instrumentalists, sound artists, visual artists, improvisers Katalin Ladik, Jonas Kocher, Agusti Fernandez, Vinko Globokar, Ensembles proton and Phoenix Basel, and have recently toured the UK and Switzerland.

Milana is also the principal harpist of No borders orchestra (NBO), a symphony orchestra consisting of musicians from all the republics of ex-Yugoslavia. NBO’s debut CD Opening, has been released by Deutsche Grammophon in 2015.

Being actively involved in education projects, Milana is also giving harp workshops and masterclasses for students, composers and improvisers. She was a guest lecturer at Cal Arts in Los Angeles, University of Minnesota in Minneapolis, Birmingham Conservatoire, Guildhall School for Music and Drama in London, University of York, RNCM in Manchester, and music school in Singapore. She is also a sought after harp teacher, whose students won numerous international competitions, and are studying at prestigious European conservatoires, such as CNSM in Paris.

Milana collaborates regularly with composers and has given first performances of many works (solo and ensemble). As one of the major Serbian proponents of modern and contemporary music, Milana has given Serbian premieres of solo and ensemble pieces from composers as diverse as L.Berio, S.Bussotti, K.Saariaho, F. Donatoni, J. Cage, M.Kagel, S. Steen-Andersen, T.Rai, R. Murray Schafer, K. Stockhausen and C. Wolff. Through her artistic leadership of Ensemble Studio6, as well as her activities as soloist, she has encouraged, commissioned and performed works by Serbian composers Svetlana Maraš, Sonja Mutić, Jasna Veličković, Jug Marković, Nemanja Radivojević, Vladan Kulišić, Branka Popović, Svetozar Nešić, Isidora Žebeljan and many others.

Apart from her involvement in contemporary composed music, she is an active free improviser, often in various groups or in a duet with Richard Barrett. Improvisers with whom she has worked with include Frances-Marie Uitti, Elisabeth Harnik, Agusti Fernandez, Chris Cutler, Paul Pignon, Annie Gosfield, Butch Morris, Rhodri Davies, Yedo Gibson, Anne la Berge, Zsolt Sőrés, Peter van Bergen, Peter Evans.  She was one of the founders of Collective for improvised music ImprovE2, organisers of regular monthly events in Belgrade between 2012 and 2015, with over a hundred musicians and sound artists involved. Milana regularly collaborates with improvisers in projects throughout the Balkans.

Milana holds degrees from University of Arts in Belgrade (Bachelor studies in 2000); Trinity College of Music, London (Postgraduate Advanced Diploma in 2002, with Gabriella dall’Olio, Imogen Barford and Sioned Williams ); and Royal Conservatoire in The Hague, Netherlands with Ernestine Stoop (Master of music in 2011).